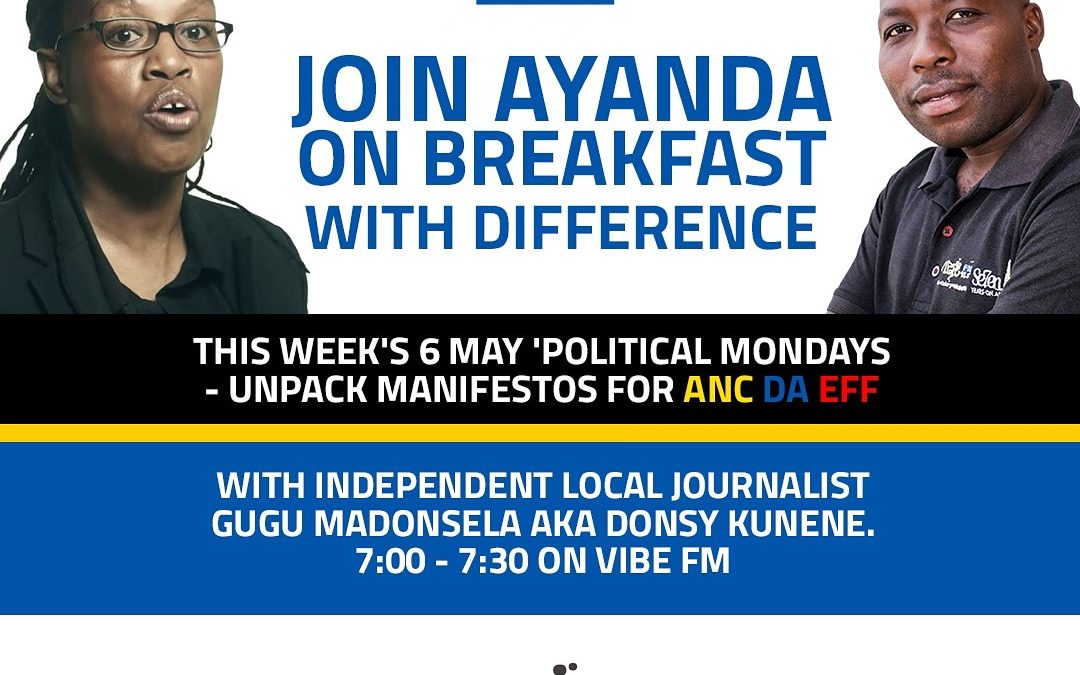 Could you explain to our listeners what an election manifesto is; what does it mean to each one of us?

I think this is a very important question because most people don’t know what a manifesto is. As a community radio station like Vibe FM we are here to teach people what is a manifesto. A manifesto is a declaration or an announcement that is made by political parties to the citizens of the country before the elections. This announcement has terms and objectives of the party. This means it talks about what that particular political party aims to do should it be elected to office. The manifesto is used to campaign.

Do you think the manifestos presented by South Africa’s political parties contain what the citizens of the country want?

The upcoming elections are mostly targeting young people. One thing that affects the young is high unemployment, education and drug abuse. But when we look at the different manifestos they don’t say much about the issues that affect the youth. The top three political parties; the ANC, DA and EFF, are not explaining in detail how they will implement everything that they have mentioned on their manifestos. It is always important to explain how you are planning to implement your programs. Most political parties are more focused on the land issue but they are forgetting that the target for these elections is the youth and young people are more interested in education, employment and to stop drug abuse. And I would say these manifestos are very weak in addressing these challenges.

Is it a coincidence that we see protests in the run up to elections?

I think as South Africans we know that if we protest we will get what we want. We had protests across the country over the past 5 years but as we approached the elections, these protests became more serious and visible. As people we always think that our political parties will change if we protest before the elections. What I saw was the political parties doing something different from what people were doing.

People were protesting for jobs, water and electricity which are basic needs, but we have seen the government opening factories and libraries. Most of this happened weeks before the elections, in a plan to attract more votes.

From where I am standing, I don’t think that these are the main issues that people are worried about as much as it will boost the economy. People demand basic needs. Public infrastructure was destroyed during the protests but nothing was done.

The only political party that has a manifesto that focuses on the young is that of the Economic Freedom Fighters. The EFF have tried to relate their ideologies to young people. This party is more focused on student politics so that is why it has more support from young people. So the observation that young people didn’t come out in numbers to register to vote was wrong.

No political party took the matter seriously including the African National Congress and the Democratic Alliance. Most parties did not talk about the things that would attract young people and this will affect our country negatively in the future.

Do you think it was a great idea for political parties to use the call for free education to campaign?

Our political parties have ambitious ideas on their manifestos but the challenge will be funding and implementing these ideologies. On paper, they say all these good things about education, but none of the political parties mentioned on how they plan to carry out these ideas.

The ANC and the EFF believe in free education, and also sustaining already existing programs and policies in this regard. However, their promises around education are meaningless.

For an example the EFF said students will travel for free on public transport, free learning materials, and free driving school lessons. As much as it is said, it is not realistic and their measurements are not achievable. The DA said their approach will be more on funding higher education but they are not saying how these bursaries will be funded.  – Vibe FM (Edited by Philile Masango)