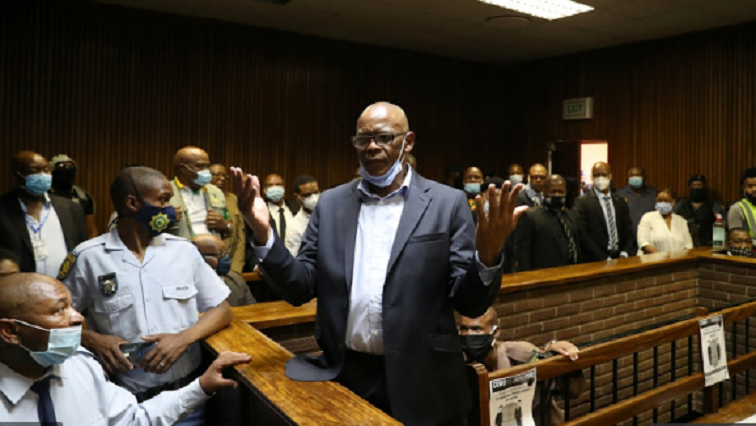 Bloemfontein was awash on Friday with supporters of ANC Secretary General, Ace Magashule.

Magashule has been released on R200 000 bail and the matter will return to court on 19 February 2021 for the addition of at least three more accused persons on the charge sheet.

The NPA says this is also aimed at joining Magashule with seven other accused in the matter.  They include Sodi, the head of department of Free State Human Settlements (FSDoHS), Nthimotse Mokhesi; Director Supply Chain Management at the FSDoHS and a former Free State MEC for Human Settlements and former Mayor of Mangaung, Sarah Matawana Mlamleli.

The court has ordered the ANC Secretary General to surrender his passport, to inform the investigating team if he wishes to travel abroad and not to be in contact with any witnesses particularly his former secretary, Moroadi Cholota.

Scores of his supporters descended at court in defiance of the ANC’s directive that members respect what Magashule’s deputy Jessie Duarte described as his wishes that “he would not want any one or groups to march, print posters or T-shirts or placards on this matter or his name.”

Speaking on SABC News, Mahumapelo expressed concern about the police’s heavy-handedness towards protesters. He also claims that state resources are being used to prosecute some members of the ANC, while pledging support for Magashule saying “he will never be alone.”

Yengeni, like many other Magashule supporters who were in court, spotted a tie with ANC colours. He said nobody would prevent him from supporting Magashule while dorning party colours. “I fought hard to wear those colours,” he said.

Yengeni and other high ranking members of the governing ANC were also prevented from entering court.

In October, some ANC Free State members, who said they were affected by the asbestos and the Vrede diary farm scandals, march to the ANC headquarters in Johannesburg, calling for Magashule’s head.

The march had followed the arrest of the first seven suspects in the asbestos corruption case.

The ANC members called for Magashule to also be held accountable in the saga as the alleged corruption happened while he was Free State premier.

* It is alleged that in August 2015, Magashule corruptly accepted gratification of R 53 550 paid on his request towards the tuition fees of the daughter of a then acting judge from Mpambani.

* In June of the same year, the ANC Secretary General is also said to have accepted payment of R 470 000 paid on his request to M – TAG Systems for the acquisition of 200 Electronic tablets from Mpambani.

* The charge sheet also alleges that during that period, Magashule accepted a payment of R 30 000, paid on his request to S W C Nkate from Mpambani.

* Between November 2015 and January 2016, a payment of R 250 000 on his request, was made by Mpambani to Astra Travel towards travel expenses of a delegation to Cuba.

* It is further alleged that Magashule failed to report corrupt transactions in contravention of the Prevention and Combating of Corrupt Activities Act 12 of 2004.

Magashule has denied the charges levelled against him. He has also vowed to step down when ANC branches who voted him into office ask him to.

Some view Magashule’s prosecution as part of the Ramaphosa administration’s efforts to restore public trust in the country’s key crime-fighting institutions, which is said to have been weakened during the Zuma era.

However, others within the ANC sees it as causing further divisions in the faction-weary governing party.

In 2019, President Cyril Ramaphosa said graft has cost South Africa as much as R1 trillion.

While it has milked state-owned entities dry, it has also brought many municipalities to their knees.