Protests cause 17 voting stations to open late in KZN

KwaZulu-Natal – 17 polling stations in the KwaZulu-Natal (KZN) province failed to open to voters over four hours after the official opening time, due to ongoing protests.

A total of ten of these stations are in eBhethani in Bergville (4 stations) and Entabamhlophe in Escourt (6 stations) in the Uthukela District. Election staff were unable to open at 7a.m. along with the rest of the country as residents protested fiercely.

Protesting residents want the Department of Cooperative Governance and Traditional Affairs to address what they say is a critical issue for them – the issue of housing.

In a media briefing at the national Results Operation Center at noon today, the Independent Electoral Commission (IEC) confirmed that there were delays in the opening of 17 polling stations in the KZN province.

“By 11h30 today, only 17 voting stations remained unopened due to access challenges. 14 of these were in the southern coast of KwaZulu-Natal. The Electoral Commission is working closely with security agencies supported by government departments to open these stations as soon as possible and cafe for voters and election staff,” said IEC Chief Electoral Officer Sy Mamabolo.

The Alliance for Transformation for All (ATA) holds its 2019 national election rally on Sunday April 28 at Kandahar Sports Field in Ladysmith, KwaZulu-Natal.

ATA, led by President Ntsikelelo Gaehler is a newly established political party and brain child of the taxi industry.

According to ATA’s provincial executive council member Mncedisi Mbuyisa, the political party was formed in July 2018 in order to give a voice to the needs and interests of the taxi industry which, he says, are often overlooked in governance issues.

Mbuyisa says it is important to have the taxi industry, which consists of taxi owners, employees, taxi rank vendors and hawkers, and security marshals represented in parliament and also to advance peace and economic growth in this vibrant transport sector.

“We want to be the voice that advocates for peace and also uplifts communities in all areas of our lives”, Mbuyisa says.

Mbuyisa is confident about what ATA can deliver saying, “ATA has a proven track record in people development. This is reflected by the fact that the taxi industry was established independently from nothing by ourselves and has continuously created jobs for our people.”

ATA Organizer Nombuso Zikalala says people from all walks of life are invited and encouraged to participate in the party’s activities including the national rally as the party is not exclusive to taxi industry players.

“Everybody is represented in ATA; the elderly, the disabled, women, youth, and widows to name a few as we are dedicated to addressing and accommodating the diverse needs of our communities.” – Nqubeko FM, Ladysmith (edited by Siya Motha and Philile Masango)

ATM spokesperson Mandisa Mashiya, says the change came about after the IEC had raised concerns with the use of the term, “congress”. Many political parties, it said, used the word and that it could potentially cause confusion.

“As a result of having a lot of political parties registered with the IEC that has the word ‘congress’ on their certificates, the party was requested to consider the word ‘congress’ as it may confuse a lot of voters”.  Mashiya explains. – Nqubeko FM (Edited by Simba Honde)

Mncwango also campaigned door to door in the area, asking residents to vote for the DA.

Residents who were able to meet Mncwango told him about the challenges they are facing, particularly unemployment.

Speaking to the media, Mncwango said the community of Escourt is suffering and vowed that if his party were to be elected into office, they would make sure that at least one member of  each household is employed. – Nqubeko Community radio 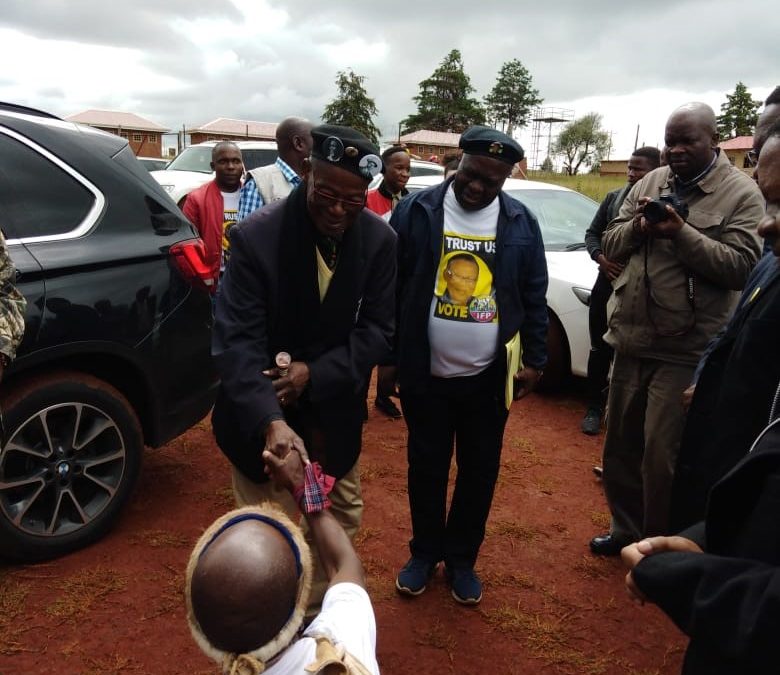 Amid national contest, Buthelezi campaigns for control of local council

In his first public appearance since the death of his wife, Inkatha Freedom Party leader Mangosutho Buthelezi visited Bergville in KwaZulu-Natal to campaign in a by-election.

Residents of ward 4 in the town, part of the Okhahlamba municipality, are due to go to the polls this week to elect a new councilor after the death of the ANC ward councillor.

Even though most attention is focused on the national election due on May 8, Buthelezi urged residents not to undermine the significance of taking part in Wednesday’s by-election that will be held on Wednesday.

This was the IFP leader’s first appearance since the death of his wife, Princess Irene Thandekile Buthelezi, on March 25.

Buthelezi thanked the public for the support offered on the death of his wife, and called on voters to back the IFP candidate, Mkhuzeni Hlongwane.  If he is elected, control of the municipality will revert to the IFP, Buthelezi said.

According to his prepared speech, “The IFP is ready to take back Okhahlamba, not because we are hungry for power, but because we want more for this community. We want clean governance, honest leadership, transparency and participation.”